I’m going to do this next Writer’s Notebook exercise in two parts. This weekend, I’m just getting down some basic ideas, and over the coming week, I’ll develop these ideas into a draft and toss it up next Friday.

What appears in the Notebook this week are notes from an exercise in Jamie Cat Callan‘s delightful The Writer’s Toolbox, but as usual, I’ll wait and explain the exercise below.

Protagonist: John, the architect from Minnesota (lives in Chicago) — Paunchy, pallid, with waxy blond hair and a red nose. Early arthritis. Fond of cheap sweatshirts and hard-soled houseshoes he can wear outdoors.

Goal:  To save Mother (from what?) — he has recurring dreams about some faceless evil entity kidnapping his mother and luring John into a trap. . . .

Obstacle: the woman in 3B — when he wakes, he calls his mother and keeps thinking of taking time off to visit her but he’s secretly in love with the woman in 3B and fears if he leaves he’ll miss his chance with her, even though he never talks to her 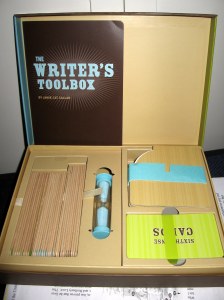 Callan’s The Writer’s Toolbox is full of fun exercises and, unlike traditional books of writing games, hers actually take the form of games and puzzles: the Toolbox is a literal box with sentence fragments on sticks, a deck of sensory cards, and — what I used in today’s exercise — a set of spinners that help you choose, at random, different story elements to build a story.

There are four spinners, which, according to the exercise in the accompanying book, you spin in a particular order to construct a story.

You start with the protagonist, of course, which in my case came up “John, an architect from Minnesota.” I paused at this point and filled in some character details, just picturing who and what this guy is. I took “from Minnesota” to mean that he’s no longer living there, which is why I moved him to Chicago — still the Midwest, but a place he might make a life. Also, Chicago’s famous for its architecture, so I figured that was a logical place for him to wind up. And I decided to make him a pretty sad sack because pathetic guys are more interesting to me.

Next, you spin the “goal” spinner to find out what John wants in this particular story. This spinner helps set the conflict and suggest a story arc. I got “to save Mother,” which doesn’t really tell me much. To save her from what? How to go about doing it? Why does he care? I noticed that “Mother” is capitalized, so I took that to mean John is a bit of a mama’s boy, not quite Norman

When I was a kid, I used to have recurring dreams about having to save my mother from harm, exactly as I describe in the exercise notes above, and I’ve never used it in a story. Those dreams were very vivid and harrowing in my childhood, some of the worst nightmares I had, but looking back on them now they seem quite silly. Which felt perfect for John. So there’s his goal.

Next, I spun the “obstacle” spinner, which tells me what will get in the way of John’s goal, what he has to overcome in order to accomplish his goal. I spun “the woman in 3B,” which, in stories about a mama’s boy out to rescue his mother, makes WAY too much sense. Who better to threaten John’s relationship with Mom than some woman he’s in love with? But John is a pathetic guy, and a shy guy, so he’ll simply love her from afar. In fact, I haven’t described the woman in 3B yet because, thinking like John, she’s barely even a person — she’s more an idea he’s fixated on.

Anyway, so there’s my problem: John loves his mother and keeps having bad dreams about needing to rescue her, and he thinks maybe that’s his guilty subconscious telling him to get his butt back to Minnesota to visit his elderly, ailing mother, but there’s this woman he’s obsessed with, and his obsession won’t let him leave home. A story that’s been done before, but I’m enjoying the character and the process, so maybe it’ll bear fruit. Besides, the best way to distinguish this story from others is in HOW John will overcome his problem. Which is why I spin the last spinner, labelled “action.”

The action John is supposed to take, according to the game, is “take up stalking.”

Now things are getting interesting. There’s no telling yet where this will lead John, or how stalking the woman in 3B will help him visit his mother and/or stop his recurring nightmares. But I’m intrigued, and I’m looking forward to finding out as I play with a draft this coming week.

Come back next Friday to see where this story goes. See you then!

One thought on “A Writer’s Notebook: The Writer’s Toolbox, Protagonist Game”