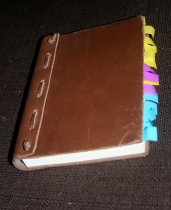 It’s been busy this week, what with the website relaunch and all. So I’m back to old notebooks (ridiculous misspellings and all).

When Samson — for he only went by his stage name now — heard from the hospital staff that all the vomiting and bloody diariah was from a rupture ulcer, that his pallor and frailty came not from a failing constitution but from his blood draining through a puckered, pulsing fissure in the lining of his iron stomach, he laughed at himself. His forehead was cold and damp with sweat he could not spare, and his bowels clenched involuntarily to contain a new delivery of black and liquid shit, but he went on laughing just the same, because in some way, at last, he’d done it. He had sworn long ago in some darker year when the emptiness began that he would dig into himself, deeper, until he broke past the void within and felt — felt — at last something. And now he’d dug too far.

This notebook was one I used a lot in grad school at University of North Texas. I don’t recall exactly when I picked it up or when I filled the last page, but I know it took me a long time to fill the book. The first page contains an early sketch for the story that eventually became “Distance,” which appeared in print in 2003 but which I’d been working on for at least a year before I published it. And the last pages contain notes from Debra Monroe‘s Q&A and reading when she visited UNT. That was, I think, some time in 2004 or 2005. So I was working in this book for at least a couple of years in the early 2000s.

The text is actually the first draft — written cold, in my car, on the side of the highway — of the story that wold become “Horror Vacui,” which appeared in the online edition of Ampersand Review last year. I’d been listening to the stereo and a song caught my ear, got my brain spinning, and soon I was conjuring the character of Samson. This opening appeared more or less as is in my head, and I turned it over a few times until I had no choice but to pull over and scribble it down in the notebook. (It pays to carry a notebook, people. It looks pretentious and “writerly,” but damn it, those things come in handy!)

I’m a bit surprised, actually, that this first draft bears so much in common with the version that wound up in print. It felt rougher at the time. But it’s worth pointing out that I crafted this several times — not once or twice, but over and over — in my head, even a couple of times out loud, just me speaking into the empty car like an idiot, before I bothered putting words on paper. Which isn’t always the way I work, but it’s worth trying once in a while. I like refining the words mentally, actually — it feels like stretching, like yoga, a wonderful combination of exercise and meditation.

All those flags taped into the notebook? When I was working on my story cycle, Strangers Die Every Day, I needed to keep all the stories and all the overlapping characters and situations straight, so I went through all my notebooks and color-coded the notes I’d scribbled for all the pieces of that big collection. This notebook happens to contain more of those notes than usual. 🙂

The song that inspired this beginning of a story, by the way? Not a song — it was a whole album, Tool’s Aenima.