I’m sure I’ve mentioned this before, but I’m part Scottish. Descended from Frasers from Fraserburgh; we still have family in Aberdeenshire.

Yet somehow, I’ve never celebrated Robert Burns Night. Not officially, anyway. I don’t know how I keep missing out on this, but I do.

This year, though, I decided to wade in and give a kind of celebration a go. Most of this was easy to arrange, even at the last-minute (I just made this decision tonight): I have two kilts to choose from, bagpipe music to play, some Robert Burns to read, and whisky (both blended and single malt) in the house. All that was left was the haggis.

I’ve actually never had haggis. I gave up meat before I ever had a chance to sample it. But I know there are plenty of recipes for vegetarian haggis, so tonight I looked one up and gave it a go.

The version I started with is from AllRecipes.com, but I didn’t have all the ingredients immediately to hand, and since this was a last-minute decision, I was going to have to wing it. Fortunately, I know that according to tradition, haggis is essentially a mash of hearty leftovers you might expect to find on a Scottish farm, so throwing together whatever was in the kitchen made sense. So here’s how I faked the recipe (and stripped it down for just one serving):

I preheated the oven to 375, and then I heated the oil over medium-high heat in a wok (I know — bare with me; there’s a reason) and then sautéed the onions. After a few minutes, I added the other veggies, and after a few minutes more, I added the “meat” crumbles and the nuts. I stirred these in the oil for a few minutes and then pushed the veggie/meatless mix aside, up the wall of the wok. I added a little more oil in the bottom of the wok and tossed in the hashed potatoes. I fried these on both sides and then mixed everything together again. I added all the seasonings and then sautéed the mixture for a few more minutes.

Once everything had cooked, I pushed the mixture up the walls again, away from the heat. I turned up the burner to high and poured in the vegetable broth. Once it boiled, I added the oats, stirred them until they were moist, and then I pushed the whole veggie mixture down into the broth, cut the heat to low, and covered the wok to simmer for 10 minutes.

While the mixture was simmering, I beat the egg and sprayed a crockery dish with cooking spray. Then I cut the heat altogether and moved the wok off the burner, mixed in the beaten egg, and transferred the whole mixture to the crockery dish. I covered the dish and baked it in the preheated oven for another 10 minutes.

And that was that.

Honestly, this isn’t really anything like any haggis, vegetarian or traditional, that I’ve seen. It was just a first run at things using whatever I had on hand. The texture wasn’t minced and “pudding-like” enough; in future runs, I’ll chop everything finer, and I’ll probably include mashed beans for a thicker, more paste-like texture. I also should have let the mixture cool completely before adding the egg, so it wouldn’t cook into fried-rice-like chunks as soon as it came into the mixture, but I was short on time and it was fine. And I wish I’d had a vegetarian “sausage casing” or even a filo dough — something to stuff the filling into or wrap it with, instead of just spreading it into this dish. I also would omit the hashed potatoes (which I included mostly because I was short on time and didn’t want to bother with the traditional side dishes of “neeps and tatties” — mashed turnips and mashed potatoes).

Still, the oats and the nuts gave it a nice gritty texture, and covering the dish allowed it to bake in its own seasoned juices, so it tasted fine to me. And considering the whole thing took me little more than half an hour to cook, beginning to end, I think it turned out pretty decently. Better still, it was a terrific complement to my whisky (nothing fancy — just a simple Walker Black — but I’m having a nice single malt later tonight). 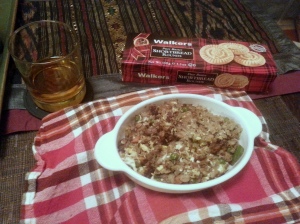 [UPDATE: I said I’d scaled this down for one serving. It’s actually more like two. Sitting there in the dish, it looks like a nice little dinner, and when I ate it, it went down fine. Not too filling at all. But — and I should have foreseen this given the ingredients, especially the oats — it kept expanding in my stomach all night, so much so that when I awoke this morning I was overfull and suffering from some pretty gnarly indigestion. I suspect if I’d simmered this recipe in the oven for at least a half hour, or as much as an hour, the oats would have cooked out and it wouldn’t have expanded in my stomach overnight. Of course, that defeats the intent for a quick fake haggis, so word of warning, anyone making this recipe: if you do it the fast way, like I did, only eat half of it. Your stomach will thank you in the morning.]

And yes, I walked my dish from the kitchen to the dining table to the tune of bagpipes, and I read Burns’s “Address to a Haggis” before sitting down to dinner.

Address to a Haggis

Fair fa’ your honest, sonsie face,
Great chieftain o the puddin’-race!
Aboon them a’ ye tak your place,
Painch, tripe, or thairm:
Weel are ye worthy o’ a grace
As lang’s my arm.

The groaning trencher there ye fill,
Your hurdies like a distant hill,
Your pin wad help to mend a mill
In time o need,
While thro your pores the dews distil
Like amber bead.

His knife see rustic Labour dight,
An cut you up wi ready slight,
Trenching your gushing entrails bright,
Like onie ditch;
And then, O what a glorious sight,
Warm-reekin, rich!

Then, horn for horn, they stretch an strive:
Deil tak the hindmost, on they drive,
Till a’ their weel-swall’d kytes belyve
Are bent like drums;
The auld Guidman, maist like to rive,
‘Bethankit’ hums.

Is there that owre his French ragout,
Or olio that wad staw a sow,
Or fricassee wad mak her spew
Wi perfect scunner,
Looks down wi sneering, scornfu view
On sic a dinner?

Poor devil! see him owre his trash,
As feckless as a wither’d rash,
His spindle shank a guid whip-lash,
His nieve a nit;
Thro bloody flood or field to dash,
O how unfit!

But mark the Rustic, haggis-fed,
The trembling earth resounds his tread,
Clap in his walie nieve a blade,
He’ll make it whissle;
An legs an arms, an heads will sned,
Like taps o thrissle.

Ye Pow’rs, wha mak mankind your care,
And dish them out their bill o fare,
Auld Scotland wants nae skinking ware
That jaups in luggies:
But, if ye wish her gratefu prayer,
Gie her a Haggis

After dinner I smoked a pipe with another whisky, and now I’m nibbling shortbread and writing this. Not exactly a traditional Robert Burns Night, but it’s mine, and for a first, it’s been grand.