One of my favorite pastimes on the Internet is reading writing advice, even when it’s bad.

Take “The Worst Muse,” for example: a Twitter account that spits out intentionally terrible (and therefore hilarious) writing advice:

You're right. The world DOES need another novel about an aging English professor's affair with a nubile young co-ed.

Remember: one culture per alien planet. More than that, and you're just showing off.

Kill your darlings, then immediately bring them back as vampire sex ghosts.

Sometimes it’s merely funny, a good way to pass a few minutes on Twitter, but occasionally, it’s a biting reminder of the traps we all too easily fall into:

(I have totally used that shortcut — though I turn to experts or native-speaking friends in revision.)

Go ahead. Spell out that accent phonetically.

(Something anyone who sets a story in the South is always wrestling with.)

This last one reminds me of a great interview between Edward Stafford and Hemingway:

My wife needled him. “Is it true,” she asked, “that you take a pitcher of martinis up into the tower every morning when you go up to write?”

“Jeezus Christ!” Papa was incredulous. “Have you ever heard of anyone who drank while he worked? You’re thinking of Faulkner. He does sometimes, and I can tell right in the middle of a page when he had his first one. Besides,” he added, “who in hell would mix more than one martini at a time, anyway?”

Of course, taking a break for a drink — or any kind of breather — in the middle of writing isn’t always a bad idea. Or so Gayle Towell writes in her quick “Ten Second Writing Tip” for Blue Skirt Productions:

The best way to handle a scene that has you stumped is NOT to sit and beat your head against it until it comes out right. [. . .] The key is to trust that the scene will come to you when it’s ready.

It’s all about patience, gang. You can’t rush good writing.

But for all my insistence on patience and aversion to strict routines, I do love a plan to get a writing project started. And I do need to get started — all summer, I’ve been trying to get going on my next novel, and while I work on it from time to time, other projects keep stepping in and taking over my writing time. Which is why I enjoyed the Terrible Minds post about “How to Push Past the Bullshit and Write That Goddamn Novel.” 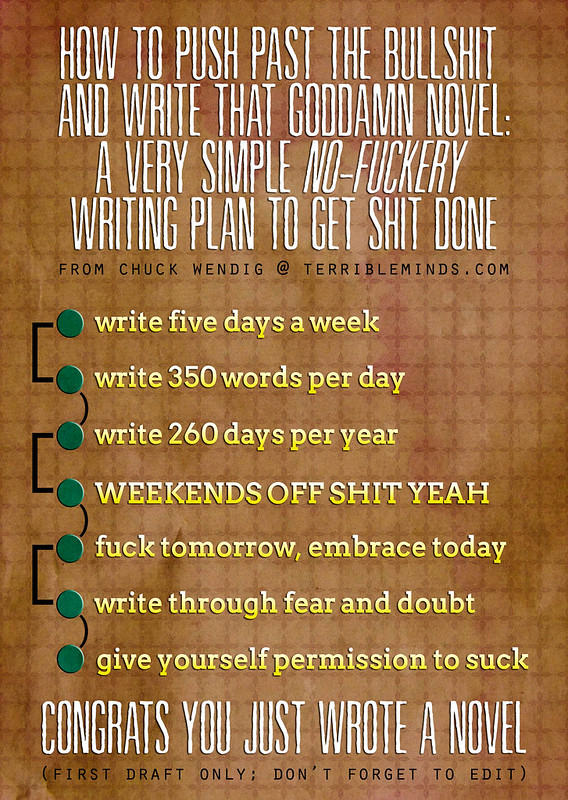 For me, a lot of this routine plays on one of my biggest pet peeves: the idea that writing is just putting words on paper. I’ve had many people, several of them friends, tell me, “Writing is easy. You just put a few words on the page every day and before you know it, you have a novel!”

Actually, no, you don’t. What you have is a very, very shitty first draft, as Anne Lamott puts it.

And this routine is an excellent way to get shit on the page. And I like the no-nonsense way it expresses that. As much as it rankles me when non-writers talk about writing as though it were easy, I do love when writers remind me that, actually, this is the work, and it’s not that hard to put the work in.

And then there’s my favorite advice article from the past week, Kevin Meyer’s “Ten Rules for Writing Dialogue.” At its heart, the article isn’t really about dialogue so much as it’s about that grueling work of editing in general:

If you want to be a successful writer, you can’t let little things slide. Most people who have been writing for a while have good instincts. A writer knows when she’s written something a little ham-fisted or lazy, but recognizing those places isn’t the hard part. Coming back to it to fix it, to take that opportunity and hammer it into something unique, that’s what’s difficult.

The list he comes up with isn’t ground-breaking in the sense that none of us has ever encountered these rules before. In fact, a lot of them feel like common sense. As Meyer writes, “Most people who have been writing for a while have good instincts.” But they’re excellent reminders, and, best of all, Meyer illuminates them through clear, direct explanations and some killer examples from his own work.

I’m going to list his rules here as a reminder to myself, but don’t just glance over these and think you’ve got it — go check out his article and see how he breaks these rules down. It’s great advice.

One thought on “Writing advice from the absurd to the profound”