Last night, at Powell’s City of Books, the people of Portland, OR experienced magic.

When I say the people of Portland, I don’t literally mean the whole city, but I very nearly mean it. For those not in the know, Powell’s famously takes up an entire city block, and last night, our literary crowd climbed to the fourth floor and then consumed the whole floor. Some folks arrived more than four hours early; I arrived 45 minutes early and already it was standing-room only, eager fans pressed up against the stacks and winding down aisles. By event time, there were so many people trying to pack into the floor to witness this literary event that they started spilling down the stairwell, and eventually Powell’s had to close the doors to avoid breaking fire safety regulations. 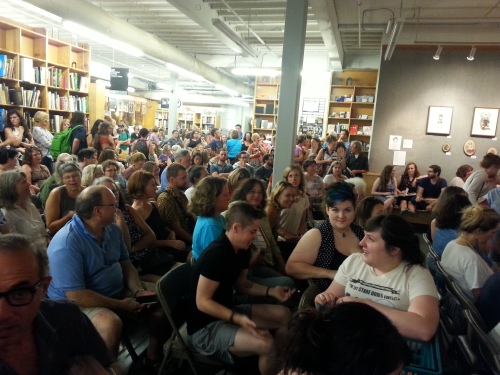 It was 90 degrees outside, the umpteenth day in a brutal weeks-long heatwave, and inside, it felt nearly as hot, but none of us minded that much because we were all in the midst of literary magic.

Her name is Lidia Yuknavitch.

Last night, Lidia (I hope I can call her that — we know each other a little bit) launched her latest book — her second novel — The Small Backs of Children.

The bit she read was wonderful, a beautiful and haunting attention to a girl’s inner life in the midst of trauma and, later, a fascinating break to focus on the author: that’s right, the story of the “author” (not Lidia but kind of Lidia) is woven into this book as well. It’s not quite Vonnegutesque (it’s both more and less intimate, very much a narrative of the author’s inner life but told in the third person) but it reminds me a bit of that, like somehow Vonnegut-meets-Austen in terms of the perspective but all Lidia in terms of the voice.

“Yuknavitch uses language in a way that is so sensual it is almost sexual,” writes Genevieve Hudson for The Rumpus. “Her fierce verbal affronts, filled with invented words and portmanteaus, not only bring meta-fiction into the writing, it also creates the subversive sound bites that give her writing its unique contour. This is the Lidia stamp.”

When I got home, I couldn’t help but open the book and read the first few pages; it was hard to put down and I wound up reading the first chapter and part of the second. Then I whipped open my laptop and started working on my own novel; my favorite authors are the ones whose books inspire me put them down and write my own, and Yuknavitch is definitely on that list. 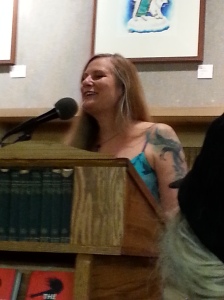 Of course, Lidia being Lidia, we couldn’t just celebrate her book. First, we had to sing happy birthday, because a friend of hers in the audience had a birthday yesterday as well, and Lidia likes to give her spotlight to others as often as she can.

Which she talked about at length, both before her reading and after, during the Q&A, which wasn’t really a Q&A but, at her request, just a conversation. (Some people asked how she was feeling, commented on how much they liked her tattoo, told her how they thought she was magic and they love her, to which she replied, “You’re magic too!” and “I love you, too.”) She talked about how, whenever she manages to pry open a door to some new opportunity, or to some new way of seeing the world, or to some new way of making art, she wedges her foot in that door and tries to hold it open for as many people as can get through. Which is something she says often, and to great applause.

She talked about love and creating and passion, about writing deep into the well of personal trauma, at least so long as it’s just for you, and then you can figure out what others need to hear.

She talked about her belief that we keep with us little pieces of every person we meet, and so “when something good happens to me, it happens to WE, too.”

She talked about moving on from one writing project to another, especially considering the deep emotional and creative investment demanded of our writing. She talked about the people we have to become to write the stories we have, or the stories we have to write to cope with the people we truly are, and then she spoke one of my favorite lines of the night, regarding putting your work out into the world and letting it go: “You shed a skin you don’t need anymore.”

After the conversation, her son gathered an armful of rolled black tshirts printed with the bright red cover of the novel, and he launched the tshirts into the crowd, who threw their arms in the air and shouted like they were at a sporting event or a concert, which, essentially, we were: before Lidia arrived, a few friends of mine tried to start a wave (though it was already too hot for many folks to participate), and when Lidia took the podium, the first thing she did was invite us to all join in singing (that birthday song I mentioned).

Then Powell’s opened the autograph table and by the time I’d gathered my satchel and hat from under my chair, the autograph line had wrapped clear to the back of the room and was starting around the back wall. Again, Powell’s takes up a whole city block, so within half a minute, Lidia had a line more than a block long.

And she smiled at every person she met, hugged many of them, took photos . . . .

Because she is magic.