The other night (on Leap Day!) I headed to Powell’s City of Books here in Portland for the release of Monica Drake’s already-lauded new book — her first story collection — The Folly of Loving Life.

I love Monica’s work, her two novels and the wonderful essays she publishes, and she also happens to be a friend and neighbor of mine; I’m also a huge fan of the publisher, Portland’s own Future Tense Books. So I’ve been eager for this book for a long while, and I preordered my copy and picked it up at a small “soft release” party on Valentine’s Day. Between then and Leap Day, the book started getting great buzz. Writer friends like Lidia Yuknavitch and Cheryl Strayed have been praising it on social media. Willamette Week said that “reading these stories is a bit like finding a beautiful painting of a wound” and raved about the book’s tribute to a changing Portland. Portland Monthly called it an “emotionally attuned and haunting collection,” and they ran an interview with Monica full of beautiful writers-life gems:

Writing’s really hard, and I am not fast at it, so you have to be in it for the long haul. And if you’re going to be in it for the long haul, it has to be enjoyable. I’ve been doing this for 25 years now, and so how are you going to get through 25 years when you’re going to have a lot of rejection? When you’ve got really cool people you can talk to and share your work with and maybe get them to recite your lines once in a blue moon, that’s big feedback. Plus you get to see their work and see it grow and evolve. That’s just a dream. That’s the only way to do it, I think. There are some writers that just like to write in isolation, but I don’t know—you just gotta keep it fun somehow. People think of that word “fun” as trivial, but it’s really so crucial.

I shared that quote with my students this week, after a particularly good day of workshopping in class. One student emailed me to thank me for the quote. “That’s just what I need to hear after writing all night,” he told me.

Also, there was this beauty — again, connected to the community of writers in Portland:

I was writing these short, kind of cuckoo stories, and I was down at Powell’s one time and heard someone talking loudly. I realized they were reciting lines from these little immature stories I’d been generating, and it was Chuck [Palahniuk]. He was calling out to me by remembering sentences that I wrote. It was so funny and flattering and interesting, and I think it was gestures like that that made writing really fun. Those kind of things built the community and kept me personally writing, and in some ways it is just an extended conversation with those writers that I love. I’m just lucky to have the writers I love right in the room. 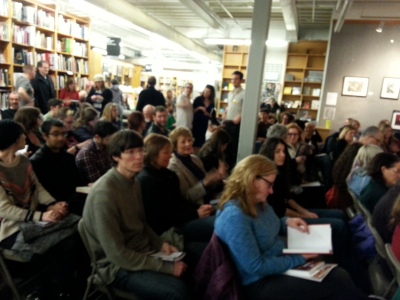 It’s a sentiment she repeated this past Monday at her book release, and indeed, the room was not only packed to the rafters, it also was chock full of writers, and many of them were writers Monica knew well enough to call out by name during the Q&A. Liz Prato. Lidia Yuknavitch. Domi Shoemaker. Portland literary goddess and Unchaste Readers series founder Jenny Forrester. Celebrated publisher Laura Stanfill was taking photos, and so was author Davis Slater. Poet Barbara Drake (Monica’s mother) cheered from the audience; Chuck Palahniuk sat unassumingly in a corner and applauded his old friend.

But because this is Portland, there were also so many other writers in the room that none of us could have known them all. While I was sitting quietly in my seat waiting for the event to start, I spotted Chuck Palahniuk and sneaked a photo of him to send to my brother, who is also a big Chuck Palahniuk fan. A moment after I snapped my photo, a woman sneaked over to Palahniuk and quietly apologized for disturbing him. She showed him a tattoo on her arm. They chatted for a few moments, then she returned to her seat near me. A guy behind me said, “What’s your tattoo?” She pulled back her sleeve to show him a passage of text from one of Palahniuk’s books.

“Oh, I thought that was him!” the guy behind me said.

“I thought so too,” she whispered. “I wanted to ask someone, but I didn’t want to broadcast it and make a big scene.” I noticed that tucked underneath the woman’s brand-new copy of Monica’s book was an issue of the comic book, Fight Club 2.

A few minutes later, that same woman turned to the man behind me and said, “Didn’t you have a book out recently? I think I’ve seen you read here before.”

The guy chuckled and demurred. “No, ha ha. Not me.” Then he added, “I just have the one book, and that was six years ago.”

Because of course he had a book. This is Portland.

Because of course — we all have books in Portland.

“I feel like everybody’s writing,” Monica told Portland Monthly in her interview, “and everybody should be writing! Portland is just lucky and thick with it.”

And that’s the thing I love most about this town. For all of Portland’s growing pains the past several years, one thing has remained, has gotten even better: our writing community here is vast, diverse, interconnected, and hugely supportive. New writers alongside established writers, unknowns chatting with the famous (and the infamous), genre writers working with literary writers.

“I think Portland has an amazing writing community too,” Monica told Portland Monthly. “Writing isn’t just the written work that we make, it’s the whole approach as a value system and a lifestyle, and I love the way the different networks of writers have gotten closer together in Portland.”

And that’s one of the things that makes Monica Drake so necessary to the Portland writing scene. She gets this city; in many ways, her writing is this city. “While [her] novels are more character studies, involutions of eccentricity,” Matthew Korfhage writes in his Willamette Week review of The Folly of Loving Life, “among the shorter narratives here it is place that feels most freshly described: the art museum, the cul-de-sac neighborhoods whose roads are all named the same. [. . .] Time was, you’d give a newcomer Palahniuk’s book Fugitives and Refugees to show them what living in this city is like. Maybe from now on you’ll give them this one [. . .].”

You can pick up The Folly of Loving Life through your local bookstore (ask them to stock it!) or online from Powell’s or directly from Future Tense Books. (Yes, it’s on Amazon, too.)