In the afternoon on November 9, I wrote on Facebook:

I researched, scribbled notes, sat in my chair by the fireplace and thought and thought . . . but I didn’t write anything until November 15. A week after the election, I needed the release of art. Plus, my very excellent librarian/genealogist mother-in-law had sent me a trove of amazing historical information about the region and time period I was then writing about, so I had pent up a backlog of ideas and, on November 15, I burst onto the page with almost 6,000 words, bringing my total up to 23,243.

But then I stopped writing again.

I am still taking notes, scribbling short scenes or character sketches, so in truth, I have been writing and racking up a higher word count. But it has never been sustained or cohesive work, and I haven’t bothered to tally up the words I’ve committed to page or screen in a week now.

I think in some respects I’ve been attending to the mind and the heart these past two weeks, concentrating on my family and my literary community. I’ve also been in shock. And I’ve been checking in with friends, reading essays and poetry and think-pieces, trying to figure out how to help people. In my house, we’re planning donations to activist organizations; I’ve donated to the Kickstarter to publish the first-ever Unchaste Readers print anthology of work by women and gender-nonconforming writers; I’ve signed petitions and called or written my government representatives.

But it is also time, now, to get back to my work.

I was inspired today, in particular, by writer Evelyn Sharenov, who wrote on Facebook, “I feel like I’m finally awake. It didn’t occur to me than an election could throw me so far off course, that it could make me lose my focus, make me weep, overwhelm me with anger. But I am now awake.” She described a story she’s been struggling to write for a long time, and the breakthrough she had last night that has allowed her back into the piece. But I was most taken with those first lines, the nightmare she describes and that sudden, enlightening line: “But I am now awake.”

Something about that line woke me from the stupor of the past couple of weeks, and I am seeing clearly now the path forward, both for myself and for this novel. I don’t think I’ll be blazing through the words the way I did that first week of November — what’s coming requires a more deliberate pace, a more thoughtful approach to the narrative — but I know not only where I’m headed but also why I’m writing this book.

And that is empowering. 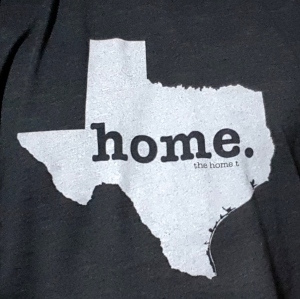 So this afternoon, I put on my Texas “home” t-shirt (another gift from my mother-in-law, and the company donates part of their profits to multiple sclerosis research, so here’s to doing a little more good in the world), and I picked up my Texas research and my laptop, and this evening, I’m getting back to work.