My late paternal grandfather was a deeply religious and compassionate man, had a tremendous and constant sense of humor, and stood six foot four and a quarter — the same faith, disposition, and height as Abraham Lincoln. Which is the reason I always felt an affinity for Lincoln: he reminded me of my Grandpa.

Lincoln was my gateway to studying the US Civil War, which eventually led me to write my first published novel, Hagridden. But in the meantime, I remained fascinated by the figure of Lincoln. His politics, his faith, his humor, his prose. To this day, I use the five acknowledged drafts of Lincoln’s Gettysburg Address to teach audience analysis,  workshopping, and revision skills to my college students.

But I am just a casual dabbler in the mythology of Lincoln compared with author DL Fowler, who has written two novels about Lincoln — Lincoln’s Diary and Lincoln Raw — and is currently working on a third. 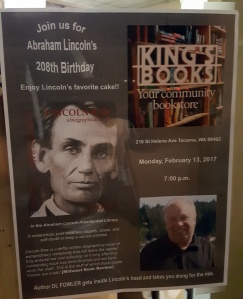 Last night, Fowler gave a talk and reading at Tacoma, Washington’s famed King’s Books, and the anecdotes he can rattle off from memory are astounding. For example, I knew that Lincoln had as a child been kicked in the head by a horse, but I never realized (or had forgotten) that this resulted in a drifting eye, making his love of reading (and that fact that he taught himself) all the more impressive. I also knew that Lincoln had had a long-standing adversarial relationship with Stephen Douglas, but I never knew until last night that Lincoln had once broken off his engagement with Mary Todd, after which the future First Lady began dating . . . Stephen Douglas! According to Fowler, this annoyed Lincoln enough that he renewed his relationship with Mary Todd, stealing her back from his political rival!

These are the kinds of stories that Fowler revels in. As he said last night, while a lot of Lincoln scholars tend to focus on Lincoln the President, or Lincoln the politician, or Lincoln the lawyer, or any other noun-label one could apply to Lincoln, Fowler has always been most interested in Lincoln the human being — the man rather than the American myth. (Fowler’s latest interest: Lincoln the poet. And he makes a compelling argument for the lost verse of America’s greatest president!

Fowler’s talk last night was fascinating, though of course, I expected such brilliance from Fowler — after hearing him read at a few of Tacoma’s Creative Colloquy readings and hearing his engaging interview on the Literally Tacoma podcast, I knew the man knows his Lincoln and knows how to write a story. Still, the thing about Fowler is that no matter how many times you hear him speak about Lincoln, you always wind up learning something new. Which is why I’m eagerly awaiting Fowler’s third Lincoln-related novel — as big a Lincoln fan as I am, I still have a lot to learn.

And Fowler’s the guy to teach me.