I’ve been busy this week. I just began my winter term teaching college writing, I’ve started finalizing the layout and the cover design for the February issue of Jersey Devil Press, and I’m working on a major redesign of this website. (Stay tuned for more news on that front!) So, I’m breaking out the old pen-and-paper notebooks again.

NYPL is a strange sanctuary of literature, where the librarians have chosen the protection of books over access. It is still a public library, but they have an entire room just for the catalog (today, a bank of computers), two huge reading rooms filled with desks, and between them several banks of counters like teller stations at a bank where you take your book requests so the library assistants — not you — can go and retrieve your materials.

Book rooms behind closed doors for sequestered study like a monastery.

* Look into grants for library workshops?

* Look into visiting English/CW classes in the middle & high schools?

With young poets, the best advice is to get out of their way. They know that creative writing is play, and they are still young enough to know the value of play. 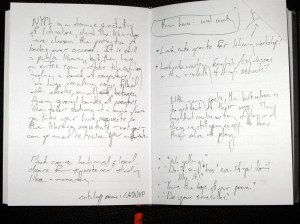 The reference to the New York Public Library dates these two pages to the end of January/beginning of February, 2008, when I attended the annual conference of the Association of Writers & Writing Programs. (Alas, that was the last time I was able to attend, since we moved to Abu Dhabi later that year and only returned to the US this past spring; this year, I can’t afford the trip to Chicago, where the conference is, which is killing me because AWP is one of my favorite conferences and Chicago is one of my favorite cities. But you can’t attend `em all, I guess.)

Taking advantage of some downtime, I strolled around Manhattan and visited the NY Public Library’s iconic 5th Ave. branch. Like me, you’ve probably seen the two lions out front in countless tv shows and movies; I was less familiar with the interior, so I was looking forward to the visit. Which is why I paused to scribble these notes in the notebook. (I wrote about it more extensively in a blog post at the time.)

The second page seems to contain notes I took at the AWP conference, where I remember attending at least one panel on teaching creative writing to kids and young adults. The previous summer I had launched a creative writing workshop for teens at the public library in Platteville, WI, where we lived at the time; I repeated the workshops in summer 2008, so I was getting some prep work in at AWP. (This page is followed by three or four more pages of similar notes.) I don’t 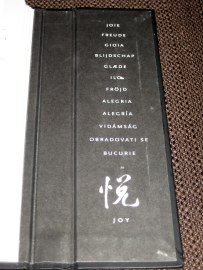 know who said the comments in quotes — one of the presenters, but I don’t recall which one. By the way, those writing workshops for teens are still going strong: I handed them over to Ryan Werner when I left Platteville, and he’s still doing them every summer. 🙂

The journal this appears in was a gift from my mother. It’s one of my favorites, partly because the paper is so smooth and easy to write on but mostly for the “Joy” kanji on the magnetic flap.