A couple of weeks ago, I was at the campus of the Pacific Northwest College of Art, where, in the lobby, I found a pile of crayons on a table. I don’t know why. It’s a college of art — why wouldn’t there be crayons just lying around?

Anyway, I sorted through them — weird color pairings, red-blue with blue-red, yellow-green with green-yellow, everything an opposite, everything hyphenated — until I found the odd color out: “bittersweet.” I used it to write its name in my notebook: 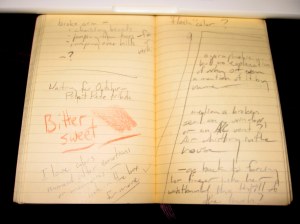 I made a few other notes, and then, when I got home, I wrote this:

The box of crayons was in disarray. Again. I dumped them all on the floor and began sorting them by shade: the greens, the blues, the metallics. But it didn’t make sense to me the way it did when I was a kid. The organization all wrong. So I devised a new system: the primaries, of course, red and brown and black. Then the unimaginative combinations: red-violet, green-blue, orange-yellow. The stupid names: laser lemon, mauvelous, piggy pink. This was easy. Next, the foods: almond, asparagus, cotton candy, macaroni and cheese. Then the plants: forest green, cornflower, dandelion. Was plum a food or a plant? New category: fruits. The exotic earthy shades: raw umber, sepia, chestnut. No, that’s a plant. The emotions: bittersweet, blush. The metals, which still made sense. The skin tones. There was only one. “Flesh.” A pale peachy beige. White folks who’d gotten just a bit of sun, not beach-tan but flushed from an afternoon tossing a frisbee in the park. As though God had fashioned His people not from clay or mud from from putty and plaster. Jesus was indeed a carpenter, it seemed, the people He saved all the color of pine lumber. I unwrapped it. I smelled it. I put the flesh in my mouth, the way a toddler would. It tasted like tallow and a bit of salt. When I pushed my teeth into it the flesh parted in flakes, a shaving at a time, until it broke in my lips. The nib opn my tongue. I sucked at the flesh until it went soft, then I swallowed it. I looked at the shattered end of the crayon, naked in my fingers. I looked at the rest of the crayons, the last unsorted shades, and saw that I had been wrong. Tan, too, was a flesh color. If not of skin, surely of hide. It would taste leathery, like sucking on the fingers of a glove. I unwrapped it, pushed it into my mouth, too. I would need a new category: edible and inedible. But I didn’t bother starting, because I had sorted the colors already and there wasn’t any flesh left.

At the time, my super-secret writing group was playing with a super-secret theme, the details of which I won’t reveal but which involved the word “flesh.” So as I was playing around with the crayons, I was thinking about that — I even wrote the words “‘flesh’ color?” in my notebook — and also about the oddity of naming colors after emotions. So I put those two ideas together.

I actually kind of like this piece, at least in concept, and I might play around with it some more and see if it could develop into something short, a flash piece or (dare I attempt one?) a prose poem, which I’ve been intrigued by lately but haven’t yet been brave enough to tackle.

I think I just dared myself….

Oh, and I wasn’t kidding about the crayons on the table. I snapped a photo of them with my iPod: 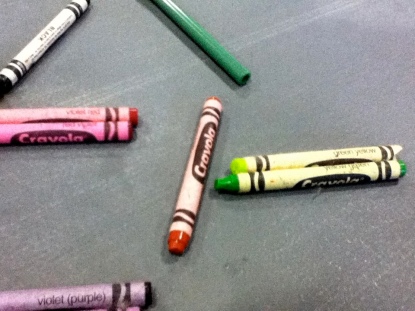 8 thoughts on “A Writer’s Notebook: crayons”