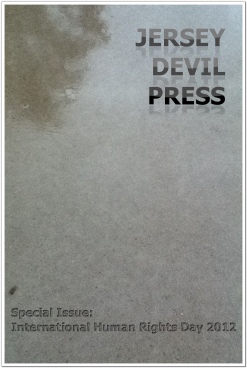 Ordinarily, when Jersey Devil Press releases a new issue, our editor does the official intro on the website and I just spout off whatever I think about the issue here on my blog. But this issue’s special, and really, I can’t say much about it better than Mike Sweeney already has, so I’m just going to quote his intro verbatim:

No, Jersey Devil Press has not gone overtly political. (And hopefully never will)

So why are we publishing this story? Three reasons.

First, one of our missions at JDP is to publish stuff that deserves to be published that a lot of other people won’t touch. We like being the indie lit community’s Isle of Misfit Toys. Sometimes that means publishing a novella about poo-eating aliens. Sometimes it’s a story about peeing on a magical unicorn. And sometimes, it’s something a lot, lot darker.

Second, we think we have a thoughtful readership that can handle this story, that can see why we had to publish this incredibly dark piece of satire once it was submitted to us.

Third, and perhaps most importantly, we’re publishing this because it’s about something truly awful that actually happened to a real person. As we weighed the pros and cons of publishing this, that’s the thing that kept coming up: the chance to give a voice – even a satirical one – to a woman who died young and horribly.

And that’s why we decided to publish this story even though it violates many of our guidelines and particularly the one about rape. (We probably should say TRIGGER WARNING, by way of preface.)

It’s not an easy read, by any means, but we do think it’s a worthwhile one.

With all that said, we present Robert Buswell’s “How I Upstaged Anne Frank.”

These are the stories most worth telling.

And that’s why, for this special stand-alone issue, we published this one.

One thought on “Jersey Devil Press. Keeping it real.”