I’ve been reading a ton of little articles and blog posts about writing the past couple of weeks, to the point that my browser was getting sluggish from all the tabs I had open because I wanted to revisit articles. Not all of them are recent, and only a handful were ultimately of any use. But there were some great ideas, and I thought I’d compile them into a little post of links here:

“Want to Learn How to Think? Read Fiction,” Tom Jacobs

Are you uncomfortable with ambiguity? It’s a common condition, but a highly problematic one. The compulsion to quell that unease can inspire snap judgments, rigid thinking, and bad decision-making. Fortunately, new research suggests a simple antidote for this affliction: Read more literary fiction.

I am such a sucker for brain science, especially when it overlaps with studies about reading. Of course, in many cases, what we wind up with is just science discovering or more scientifically explaining what we writers and readers have known all along. But we all know how writers crave validation.

The way it works is this:

“The thinking a person engages in while reading fiction does not necessarily lead him or her to a decision,” [the researchers] note. This, they observe, decreases the reader’s need to come to a definitive conclusion. “Furthermore,” they add, “while reading, the reader can simulate the thinking styles even of people he or she might personally dislike. One can think along and even feel along with Humbert Humbert in Lolita, no matter how offensive one finds this character. This double release — of thinking through events without concerns for urgency and permanence, and thinking in ways that are different than one’s own — may produce effects of opening the mind.”

But you should read the whole article, because it’s fascinating stuff.

You know, the snobbery that says opera and lacrosse and Pinot Noir and jazz fusion and quails’ eggs and literary fiction are for certain types of people and them alone? There is something innately snobby about the world of books.

I wish Matt Haig had gone into more detail about the specifics of the “snobbery” he derides. I agree wholeheartedly that exclusivity in literature — or pretty much anything else — is a dangerous idea. But I have this feeling from his list that he’s being a bit snobbish about the snobs, as though people who like Pinot Noir and jazz fusion are snobs not for their exclusivity but for their taste in the first place. I mean, the very first item on his list is “People should never be made to feel bad about what they are reading,” yet the set-up of this piece seems to ridicule people who prefer “Martin Amis over Stephen King,” as though anyone who dislikes King (or likes Amis) is an idiot. I don’t think that’s what Haig is actually saying, but the brevity of the presentation does leave that door open, I think.

Full disclosure: I have been accused of being a literary snob, and I have sometimes embraced the term. But I don’t eat quail eggs, and I both deride and celebrate Amis and King in equal measure. And while some of the items on Haig’s list are reductive, empty platitudes, there’s a lot on here to like as well, and some items that might get you thinking about your own habits and tastes. And the penultimate note is well worth repeating: “For me, personally, the point of writing is to connect me to this world, to my fellow humans. We are all miles apart. We have no real means of connecting except via language. And the deepest form of language is storytelling.”

“Captions in the Classroom,” Cody Walker

For me, the most interesting part of the essay was Cody’s use of the Caption Contest in his writing courses. Cody’s winning caption is an excellent example of not only a good joke but also a good sentence.

I’m a long-time New Yorker subscriber, and when they first rolled out the caption contest, I was a huge fan. But I thought it was a temporary gimmick, and as the years wore on, I became less enamored of it. (For one thing, a lot of the winning captions wind up being the simplest or the lowest of the options, but then the purpose of a democratic contest is to achieve the widest possible appeal, merit be damned.)

This article, though, renewed my interest in the contest something fierce! I love writing from prompts, and I love bringing those sorts of exercises into the classroom. I also love teaching students that almost all writing can boil down to the joke structure — if they know how to tell a joke, they know how to write an essay or a story or a poem or even a business letter…. So I’d often toyed with using these captionless cartoons in the writing classroom.

Walker beat me to it, and he did so in ways I hadn’t even considered yet! He manages to use a single exercise to teach micronarrative, sentence structure, metaphor, pace and rhythm, and maybe half a dozen other crucial writing skills. All from a cartoon.

I am absolutely adapting this to my classroom next fall. This is just genius.

A tournament’s system is about matching opponents together and tracking how that changes.  It’s one of the simplest, purest methods there is for managing the intricacies of a plot, while staying focused on what makes it powerful.

I love playing games in writing. I especially love charts, maps, and lists in the writing process — I love Vonnegut’s “crayon outline” in Slaughterhouse-Five, I love JK Rowling’s hand-drawn spreadsheet of her characters and plot points in the Harry Potter saga, and I love this idea of using tournament brackets as a means of plotting fiction.

Two particularly cool bits: the way Hughes expands or modifies the bracket system to better serve storytelling, and the way he explains working your way backward through the bracket to build a backstory fraught with conflict. 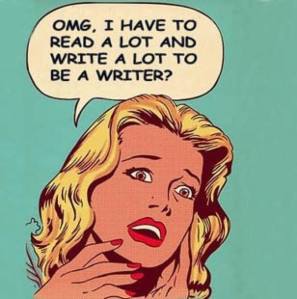 A Facebook conversation with J. Chris Lawrence you don’t get to see unless we’re friends on Facebook

This is why you need to engage with your writing community, folks: the conversations we have are fascinating. Okay, maybe “exhausting” is a better term, but I like mental fatigue the way runners like the burn of a long run.

So, the other day, a writer friend named J. Chris Lawrence posted this photo on his Facebook page along with the blockquoted comment above. And what I loved about the resulting conversation was the wide diversity of opinions. I mean, you’d think every writer on earth would be a voracious reader, if only out of solidarity or karma-bargaining. As one commenter put it, “How can you ask others to spend money and time to do what you aren’t willing to do yourself? It seems like the height of hypocrisy and narcissism.” But this was in reply to another person in the conversation who was adamantly anti-reading, and this other person made some passionate arguments against reading (or at least, needing to read): “Overall, I find writing to be a wholly unique and individual process,” this person wrote. “My process is mine and mine alone.” And later: “The first person to ever write anything great must have only had crap to read. Every writer has to find their own voice.”

Of course, this launched us all down a fun sidetrack about what the earliest written art was and what its influences were — what did the Sumerians read other than agricultural accounts or judicial rulings? Are Gilgamesh and Genesis miraculously original stories spawned of pure creativity, or are they imaginative embellishments of the everyday stories people were already telling about real events?

It only got more complicated from there. And I loved every line of it.

Oh, and if you want to know where I weighed in on the “to read or not to read” question, just read my earlier blog post on this subject, which is how I answered the question in the Facebook discussion, too.