I don’t normally think of video games in narrative, literary terms. Sure, plenty of video games depend on story and follow some kind of linear narrative, but (and I’m not an extensive gamer, so gamers, feel free to add titles in the comments) I don’t often come across a game that is so immersive and so focused on storytelling (as opposed to puzzle-solving or other gameplay elements) that it feels more like interactive literature than anything else. That old game MYST felt a bit like that. Some of the best Nancy Drew games from HerInteractive can sometimes feel a bit like that.

But I just finished Gone Home, and this game feels like something else altogether. It’s a bit like a novella that you get to literally (well, digitally, anyway) walk around inside of.

The tease for the game is intriguing enough: “You arrive home after a year abroad. You expect your family to greet you, but the house is empty. Something’s not right. Where is everyone? And what’s happened here?” The promo material describes the game as “an interactive exploration simulator,” and promises an exhaustive, immersive environment: “Interrogate every detail of a seemingly normal house to discover the story of the people who live there. Open any drawer and door. Pick up objects and examine them to discover clues.”

I love that level of detail, and in most games like this, I’m often frustrated by the limitations of what you can mess with in the game. For me, the restriction of an interactive environment to just a handful of key “clues” when there’s SO MUCH MORE going on in the background has always just served to reinforce the artificiality of a game, and this problem only gets worse as game visuals get more detailed. Why put all that effort into fleshing out richly complex backgrounds if I can’t actually engage with that detail? But Gone Home promised that I could engage, that I could actually live in this “seemingly normal house” and interact with anything.

And the screenshots seemed to reinforce this:

And in the trailer the gameplay looked smooth and organic, very much first-person POV but without being too shaky, without too much effort to artificially imitate a “human gait” with that swimming up-and-down head bob I’ve disliked since the old Doom games. It all just looks so beautiful:

If you watch that trailer, you might have caught the final, deciding factor in my buying the game: that “destination” on “Katie’s” luggage tag? Portland.

That’s right gang. This game is set in my own hometown of Portland, OR. Or, just outside it, really — an old mansion in the hills west of the city. 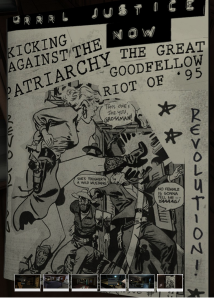 It’s also set in the mid-90s, and while the game is packed with pop culture references to the time period in general — an invitation to see Pulp Fiction in the theater, a comment about Don’t Ask Don’t Tell, a poster for The X-Files — it’s also alive with these wonderful references to cultural moments distinctive to the Pacific Northwest: the waning of grunge, underground punk and demo tapes (the game’s load screen is a cassette tape), riot grrrl music, zines.

Katie’s dad is a writer; her mom is a ranger with the Forestry Service. The whole thing just screams nostalgia for me, not only for my own mid-90s life but also for the dream of the Portland I always wished I could have lived in back then, the culture I was trying to be a part of the best I could from way down in rural Texas.

And here it is, in a video game, in a quiet, intimate narrative, in the first-person. It is preserved, and for a few hours, you get to live it in. You even get to listen to it: the game features songs (in the form of “bootleg” cassette tapes you find in the game) from actual riot grrrl bands Heavens to Betsy and Bratmobile, as well as the Portland band The Youngins.

But that’s all just icing. The cake — the sweet, rich world of the game — is the story itself, which is eerie and unsettling and heartbreaking and beautiful. It actually brought me to tears not just at the end but throughout the game. And it can do this because, as intense and atmospheric as the environment is — lights left on in the otherwise empty house, the place ransacked, a storm raging outside, dark corners and secret passages and deeply unsettling images — the main force in the game is its characters. Despite being absent at the outset of the game, everyone mentioned — the parents, the sister, the friends, the friends of friends, the colleagues, the relatives — they all have such rich backstories, which develop such complexity in those characters, that they feel present in the house, almost haunting it.

And that’s what makes this feel like fiction, like literature. The whole thing feels like you’re walking around not in someone’s game or even in someone’s house, but in someone’s life. In multiple lives. And the layers in those lives that you uncover as you progress through the game are expertly placed, unfolding and changing as the game goes on, uncovering inner lives and altering your assumptions as you go.

That’s where the real mystery in the game lies. You’re trying to figure out where your family (Katie’s family) has gone, but in the process you discover who your family really is, and how they’ve been changing while you’ve been away, and how that changes you and your perception of yourself.

And the whole thing speaks in echoes, speaks to broader issues of who we, as a society, used to be, and how we’ve changed and are still changing and how we still need to change.

I have to stop there before I give too much away. Before I get any more carried away.

I just really loved this story. In the way that I love a good book, the way I sometimes like to hold a book to my heart when I finish it. I wish I could press the gigabytes of this game into my chest.

It was that kind of experience.

One thought on “Going home again”