I keep thinking about recapping the last of my AWP experience, but I realized that everything I forgot to say the last few posts — events I witnessed, readings I attended, sites I saw — I can also show you through the pix I took:

If you’ve been following the last week’s posts, you know I walked myself raw: I wore a pair of socks on day one that I didn’t realize had worn thin in the heels, so I wound up with fairly massive blisters right from the start. (They’re fine now, by the way.) That meant I didn’t get out and explore as much as I usually do during conferences — but I did snap a few photos as I walked to and from the conference site.

Coming back from the conference one evening, I noticed the roads were wet from rain, though I hadn’t noticed any rain that day. Police blocking the road and lights everywhere. Then I spotted a crane parked in the middle of a road suspending a huge, dripping bar overhead — it was a rain machine. The next morning, I walked through another film set immediately outside my hotel, and later that day, I finally saw a sign in my hotel lobby explaining what was going on.

Speaking of my hotel: I waited too late to book my conference hotel and wound up grabbing the first room I found in the last overflow hotel available. That happened to be the Biltmore, but I didn’t realize its significance until I was there in the building: the Biltmore is where the Academy Awards and the Oscar statue were invented, and the hotel hosted the awards for several years back in the early days. Which is important in our household because my wife — whose side-project research area is on librarians in film — is a HUGE Oscars nerd. So while I couldn’t get into the famed Crystal Ballroom where the Oscars used to happen, I did snap up as many photos as I could to share with her (and I hit the gift shop to buy her a small “Oscar” statuette labelled “World’s Greatest Wife,” because she is).

I only attended a handful of panels, most of which I’ve already written about, but I have to say that, in retrospect, I’d like to attend more panels next AWP. The panel load I used to stack up was, honestly, too much, so this year’s much-lighter load was a nice change. But I enjoyed these panels so much that I’d like to have squeezed in a few more.

Something else I’m noticing, now that I’m looking at these photos again: Women writers rock! All but one of these panels included men, and on the first panel I attended (on chapbooks), I didn’t know anyone presenting so I didn’t snap photos. But on every panel, pictured or not, the stand-out awesome folks were the women writers. They were the smartest, the funniest, the fiercest, the most insightful, the most memorable.

I backed off panels in year in part to make room for more readings, which was wonderful. I only snapped photos of two of the readings, and my phone is notoriously poor in low light, but no photo would have done these readings justice anyway. From the brusk but charmingly hipsterish bandana-ed doorman guarding the reading in the whiskey library so no one would interfere with someone’s poem, to the epic “literaoke” reading/karaoke mashup in a Filipino restaurant, this year provided some of the most colorful readings I’ve ever attended!

Most of my AWP this year was in the bookfair. In recent years, I lamented having too little time to see the whole exhibitor list or hang out at particular tables, but this year I committed to walking the whole floor, table to table, row by row.

For some reason, this year looks a little less wacky than years past in the photos I took — fewer costumed writers shilling for their publications, fewer loud displays, and (for reasons of Convention Center policies) far fewer exhibitors pouring shots. But it was still plenty fun, with a lot of interactive displays and, most interestingly, a lot more exhibitors that weren’t writers or publishers or programs but creative businesses related to writing and publishing: digital typewriters, audio narratives that look like payphones, even a perfume company selling scents crafted after dead writers (the “Death in the Afternoon” Hemingway scent smelled like raw musk sprayed over a sweaty bull, which was alarming but perfect; I bought my own Lizzie Bennett of a wife the “Pemberly” scent).

So what did I pick up while walking the bookfair this year? Not as much as I wanted to — I took a lot of cards and bookmarks so I can continue shopping later, but when I left for AWP my luggage was full of books to sell, so I only had room to buy as much as I sold. Which I happily did, and I’m eager to start reading these new books and journals! 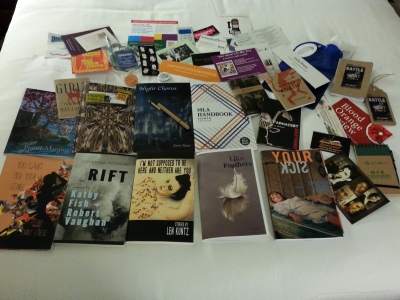 And, of course, I snagged a couple of awesome tote bags in the bookfair, too. 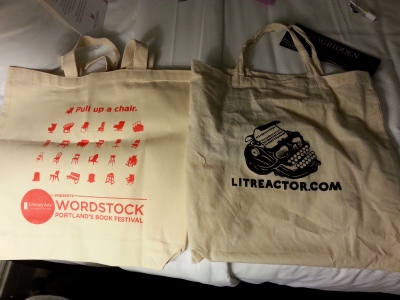 And then I packed all that up and headed home, eager for the next chance to hang out with writers and talk about craft and publishing and community — which is actually right around the corner, at the Terroir Creative Writing Festival in McMinnville, OR, where I’ll be talking about building stories from ephemera and trash! If you’re in the area, come join us!