Like most straight guys my age — and, I’d be willing to wager, a great many gay guys and a great many women — I first fell in love with Carrie Fisher in her role as Leia Organa. And it wasn’t because she was a princess. It was because she was a fierce, determined fighter, an independent woman with the intelligence and fortitude not only to hold a leadership position in the Rebel Alliance but also to resist Darth Vader’s mind probes and stare down Grand Moff Tarkin even as he obliterated her home planet. And afterward, when Han and Luke and Chewie got themselves cornered in their attempt to rescue her, she saved the boys, blaster in hand and sharp commands on her lips.

Her character taught me a lot about what I should value in a woman.

But as I grew up and came to know Carrie Fisher as an actress beyond her role as Leia, and then as an author and a brave, outspoken feminist, I learned a much more profound respect for Carrie Fisher the person. She shared a lot of traits with the role that brought her fame, but as a human being, she deepened those traits, made them human. Her writing was wry and deeply smart, her Twitter commentary refreshingly blunt and comedic, her television appearances and interviews wicked and fiercely feminist. Her public and honest battles with her demons, inner and external, demonstrated profound bravery; her ongoing refusal to be boxed into any image, even one crafted by herself, was inspiring.

And now she is gone.

I am weeping over this today. Which is silly, really, because 1) I didn’t know Carrie Fisher at all except as a celebrity; and 2) she is just the latest in a long string of celebrity deaths this interminable, rotten year. There’s no reason her passing should feel so personal, let alone affect me more than any of the other celebrity deaths in 2016.

But it does feel personal. In many respects, Carrie Fisher — or, at least, Princess General Leia — was the first woman I loved, in that simplistic way one loves one’s idols as a child. And Fisher, the person, had so much to offer our world; her voice, now more than ever, was so necessary. Her humor and her ferocity and her humility and her feminism. Her contradictions: as Leia, Fisher exhibited a complicated mix of perspectives, sometimes cynical and biting and decrying the limitations of hope but also placing so much of her hope in others and carrying so much hope for others. As a writer and as a person, she expounded on that complexity, shared much deeper versions of that cynicism as well as hope. 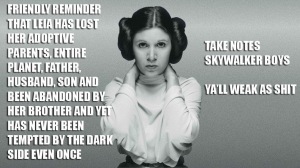 And now that she is gone . . . what? Do we wallow in our loss? Yes. I will, anyway. But then I remember a meme about Leia I saw the other day, about how Leia had lost everything — her parents, her entire planet, and in The Force Awakens, her brother, her husband, and her son — and yet she still held it together and never once was tempted to the Dark Side. And I remember a line from the first film, A New Hope, when she arrives at the Rebel base and meets with General Willard: he tells her he had feared for her when he heard the news about her planet, but, getting straight to business, Leia replies, “We have no time for sorrows, Commander.”

And so we carry on, in spite of our sorrows. We take up Fisher’s feminism, her determination, her humor, her self-reflection. We become our own hope.

But I’m still going to weep awhile longer. Because Carrie Fisher: you were our hope, and we miss you.

5 thoughts on ““We have no time for sorrows””