This afternoon, I sojourned once again into Portland. My destination was the Another Read Through bookstore, where I gave a reading with some of my fellow writers in the current issue of The Timberline Review.

But by happy (or, more accurately, bittersweet) accident, this is also the final weekend for Portland’s beloved Reading Frenzy indie bookstore — the owner, Chloe Eudaly, was elected to Portland’s City Council this past November, which is a wonderful thing for the city because she is a fierce advocate for Portland’s renters and homeowners; but as a new City Commissioner, she has to divest from her small business to avoid conflicts of interest, and Reading Frenzy is something of an institution in Portland, so its absence from Portland’s book scene will be widely mourned. So of course I took the opportunity to stop into one of my favorite Portland bookstores one last time, where I browsed the zine shelf and wished  Commissioner Eudaly the best in her new position.

I picked up two little zine-like chapbooks at Reading Frenzy: Bob Schofield’s The Inevitable June, and Melissa J. Price’s Not Enough Cloth to Cover Such Love. 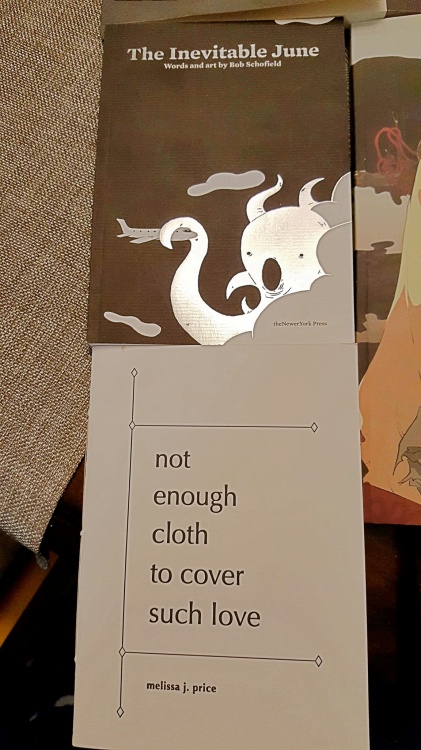 It helped that Another Read Through and Reading Frenzy are both on Mississippi Ave. (yes, Portland is so replete with awesome little bookstores that they often inhabit the same streets); it also helped that Mississippi Ave. is in what used to be my neighborhood when I lived in Portland, so between Reading Frenzy and Another Read Through is Bridge City Comics, the place that used to be my local comic book shop, which I also stopped in at. Just yesterday, my new local comic book shop, Stargazer Comics in Tacoma, hosted a Women in Comics celebration, where I picked up the first trade volume of Pretty Deadly. (The writer, Kelly Sue DeConnick, is a Portlander herself — are you sensing a trend in all this?) Actually, I had originally picked up the first issue of Pretty Deadly, but thumbing through it in the store, I knew this magical-realism violent Western was right up my alley (and would fill a hole I’m currently feeling while awaiting the next trade volume of my other favorite quasi-Western East of West as well as the second trade volume of DeConnick’s other series, Bitch Planet), so I put down the single issue and grabbed the first trade volume instead. I was right about the series; I’m already hooked, so today I popped into my old Portland comic shop to find the second trade volume (which I’m about halfway through now).

Of course, at Another Read Through, I had to snag another book or three, too. It started when I arrived early to the store and spied on the shelf a copy of a book I’d read way back in my undergrad New Testament course, for an essay I was writing on the historical Christ: Marcus Borg’s controversial but seminal Meeting Jesus Again for the First Time. Then poet Devon Balwit, who also read at this afternoon’s event, announced that she had copies of her latest chapbook on hand, so I grabbed How the Blessed Travel. And then, browsing the back issues of Timberline Review, I discovered an essay by my friend Kate Ristau, so I wound up leaving the bookshop with not only my own current issue but also the first issue of Timberline Review.

Of course, these weren’t my only literary endeavors today: taking advantage of the long drive down to Portland, I also listened to the audiobook of Harper Lee’s Go Set a Watchman — but that was significant enough that I’m devoting a full post to my review of it, so look for that first thing next week! (Sneak preview: Reese Witherspoon is definitely a Southern gal. She nails the reading.)