I’ve been a fan of Scott McCloud’s books on writing comics — books on writing in general, really, because his insights into narrative purpose and narrative structure are fascinating — but for some reason it wasn’t until a few months ago that I finally picked up McCloud’s own graphic fiction, Zot! When I did, it was in the form of the complete collection, published as a single (massive) book four years ago.

As much as I knew about the formalist background of the work and some of the ideas McCloud was playing with — elemental archetypes in the characters, superhero/manga hybrids before anyone in America even knew Japan had comics — I wasn’t really sure what I was going to think of the work. In its inception, it’s basically about a teenage boy with superpowers and high-tech gadgets, zipping back and forth between our dimension and his. There are some cool moments examining the disparity between dreams and reality, between the ideal and the mundane, and the occasional shot of genuine teenage romance. But as I read the background and even as I got into the first few installments, the story sounded almost juvenile to me. Fun, but not groundbreaking or even necessarily great.

For the first third of the book, this held pretty well true. And even in the second third (or so), when the art and some of the concepts get quite stylistically inventive — McCloud does some fascinating things in this series — it still felt, well, textbook. And it was, but that wasn’t McCloud’s fault, really. After all, he’d actually written the textbooks I was comparing Zot! to, and it was just my dumb luck that I read those books first.

But then the series shifts, roughly two-thirds into the collected book, and becomes a different kind of comic altogether. Not to give too much away (but SPOILER ALERT anyway): Zot, who has been popping back and forth between his world and ours, where his maybe-sometimes-girlfriend lives, gets trapped on our side, and the whole series turns into a kind of meditation on teenage life in America.

And it is utterly transforming. And so, so beautiful.

But no story in this whole work as as powerful as Zot! #33, which is (again, SPOILER ALERT) the issue when gal pal Terry comes out of the closet. 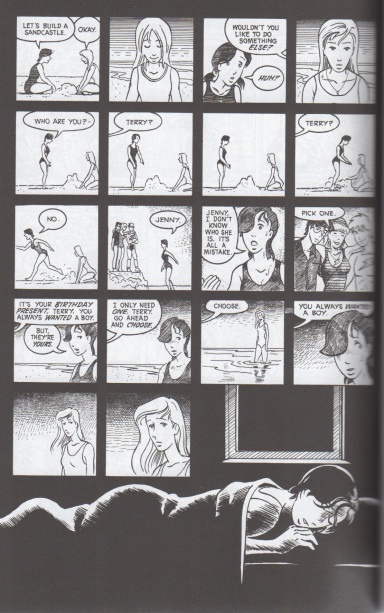 Remember, this is 1991, and these are teenagers. This issue would have been controversial, perhaps even bold, just a few years ago. Twenty years ago, it was one of the most daring things in comics. But McCloud didn’t view it as a dare, or as some kind of social responsibility — an onus — or as a gimmick to generate buzz. It is just a story, about a girl. It is mature, and subtle, and honest, and tender, and wonderful.

I say all this as a straight man, of course. I can’t know in my heart how a gay woman would respond to this story. (If you do, please comment! Especially my friends!) But for me, the ways in which McCloud approaches this story are wonderful. Consider the page above, for example: it’s one of several dream pages where Terry is confronting her sexuality unconsciously, struggling to bring it forward enough in her consciousness that she can address it in her waking life. All the dream pages are the same: black backgrounds with an even grid of panels, every image given equal weight, while the dominant figure — Terry — sleeps at the bottom of the page. The set-up of what’s going on in some of these pages — the “you always wanted a boy” juxtaposed with Terry’s longing look at the girl in the ocean — can feel a bit obvious, maybe, but they never quite feel force-fed. Never in this dream page, for example, does Terry express her desire out loud. We are given only images. We see what she sees. And through her gaze, we understand her emotions.

Elsewhere in the story, a high school boy is bullied so severely he’s left permanently handicapped. He isn’t gay, but the bullies who beat him up think he is, and in any case, no one does anything about it. (Well, almost no one — there is a wonderful heroic moment when a school newspaper student publishes a scathing criticism of the bullies and becomes a target himself.) This violent homophobia casts Terry’s emotions in a dangerous light, and she becomes not only terrified but also severely depressed. And this is when McCloud brings his manga influence to bear, using richly detailed ink drawings of landscape and weather to signify Terry’s confusion, depression, and loneliness (notice the rain in the page below), her insecurity in a militantly anti-gay world (notice the large fence surrounding the high school), her feeling of insignificance (notice how small she is on the hillside) and her self-loathing (the extreme close-up as she condemns herself).

And, fortunately, into this scene comes Zot, not as a superhero but simply as a friend — and he is possibly at his most heroic because of it.

A couple of pages later, in the same location but the rain now ended (gotta love symbolism), Zot and Terry discuss what has happened in all the gay-bashing, and Terry opens up about her fears and her feelings. Zot comes from an apparently perfect social utopia where, if this kind of bigotry exists, only lurks in the shadows — where it belongs. Which is why he is such an interesting foil for the characters in this particular story, because while he is capable of comforting Terry, he is utterly incapable of understanding where this hateful homophobia comes from and why anyone in our world would tolerate it. But, kind soul that he is, he doesn’t get angry about this; he doesn’t try to fight homophobia or judge the bigots or solve Terry’s problems. Instead, he recognizes what Terry needs most in the moment, and he simply consoles her. 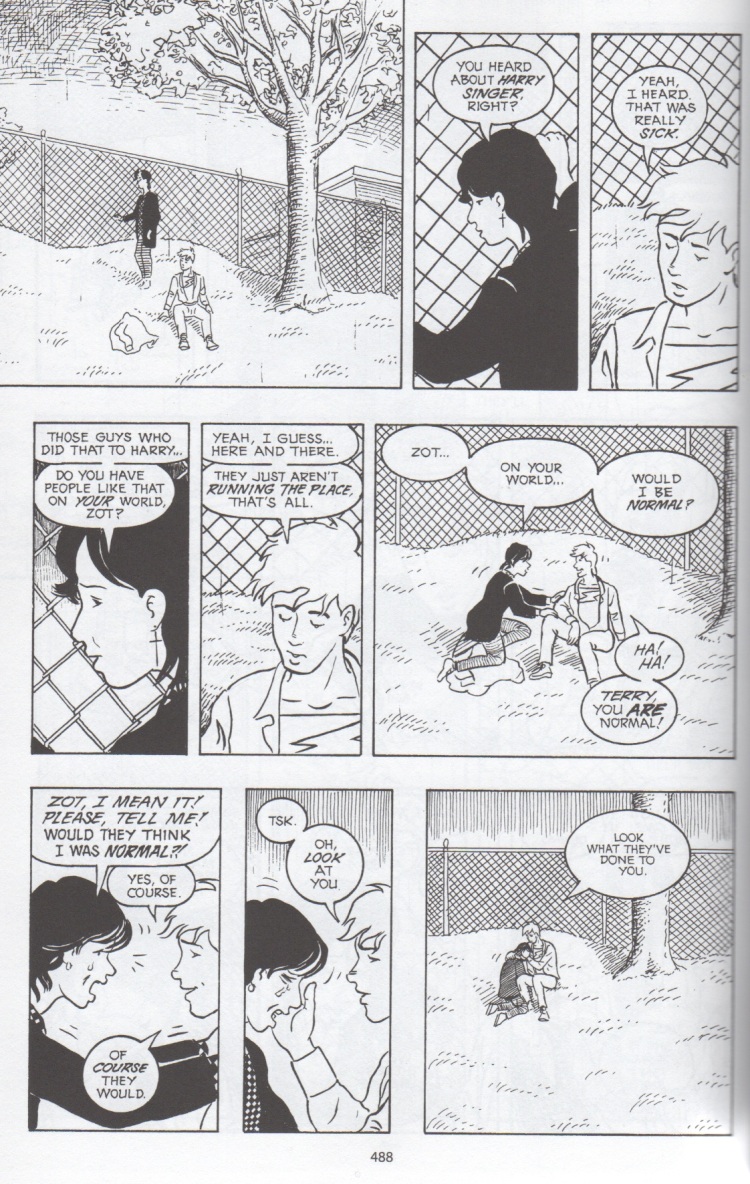 And it is that last panel that so undoes me, makes me weep every time I read it. “Look what they’ve done to you.” Those simple words — that simple gesture of holding a friend — framed once again by all that empty space and backed by that looming fence. How small Terry feels. How insignificant even a superhero like Zot is in the face of her anguish. And yet how necessary, as she crumples into him, and the most heroic thing he can do is acknowledge her pain, and hug her.

It is a masterclass in narrative perspective and in drawing (literally) characters not as characters but as human beings.

We are lucky, these 20+ years later, to live in a world at least somewhat more accepting of gays and lesbians. Even in comics, which are usually at the forefront of confronting social issues but which usually do so quietly and inoffensively, we are seeing now — finally — gay characters in major, big-name comics. From military veteran Kevin Keller, who married his partner in the Archie Comics issue Life With Archie #16 (it was the first gay wedding in comics), to gay X-Man Northstar’s wedding in Marvel Comics’ Astonishing X-Men #51, and DC’s recent retcon of the original Green Lantern as gay (a previous retcon had announced that the Green Lantern’s son was gay), mainstream comics have tackled this issue fairly fantastically in the last few years.

But so far, I haven’t seen any presentation that can compete with the emotional intensity and honesty of McCloud’s story in the Zot! series.

But we’re getting there.

It is getting better.

One thought on “Zot!, heroism, love, and the bravest story in comics”