Yes, once again, National Novel Writing Month is just around the corner.

Yet I wasn’t entirely sure I was going to participate this year. I had a great idea for a novel, but I’m not yet into it enough to plow through a rapid-fire month of 1,700 words a day. Plus, I’m teaching more this year and have a few other gigs going on, so I’m not even sure I’ll be able to hit the 50k target.

But then the other day I attended a poetry reading here in Portland. At it, Portland poet Jodie Marion read her poetry (largely from her collection Another Exile on the 45th Parallel) as a kind of “Choose Your Own Adventure” story, complete with audience interaction (with her prompting, we chose the order of the poems she read and so the overarching narrative the poetry was building). And, for some reason, something clicked for me.

No, I’m not writing a Choose Your Own Adventure novel in November. (Though that would be cool. Maybe next year?)

But Jodie Marion’s reading experiment was only possible because her poems were so intricately interconnected, like a story cycle. And story cycles are one of my favorite modes of writing. That’s what I did for last year’s NaNoWriMo, and I realized I might like to try it again.

This time, I’m going to write a whole BUNCH of tiny stories, all flash fiction but also a bit more etherial, almost like prose poems. But how to connect them?

And that’s when I remembered a Facebook question from Jessica, a friend of mine, a week or so ago. Jessica asked her Facebook friends, “If you were forced to spend the rest of your life in a library, a museum, or a zoo, which would you choose and why?” I replied that the choice was too hard — when my wife and I travel, we always make sure to visit the public library, the zoo, and various museums — so I eventually copped out by choosing “The Smithsonian,” so I could claim all three. But the other night, thinking about ways to connect stories in a NaNoWriMo story cycle/novel, this question came to mind and I realized I could write overlapping stories set in these three locations.

Later, I added “the park” to round out our favorite places and to get two indoor and two outdoor spaces.

Then, to figure out who the characters would be and what they would do, I turned to my trusty Writer’s Toolbox by Jamie Cat Callan. Specifically, I picked up the Protagonist spinning wheels. These stories are going to be short, so I didn’t want to bother with all four elements of the wheels (Protagonist, Goal, Obstacle, and Action), so I focused on only the protagonist and the action. Recycling ideas and changing character names got tedious, though, so for half the stories, I switched to protagonist and obstacle. In the first case, I’m interested in who is doing what. The barest bones of stories. And in the second case, I’m interested in who has what conflict — the barest complication in a story.

So, to put all these ideas and influences together in a way that will organize my overlapping stories and ideas, I turned to Scrivener, and that’s what today’s Notebook is all about: 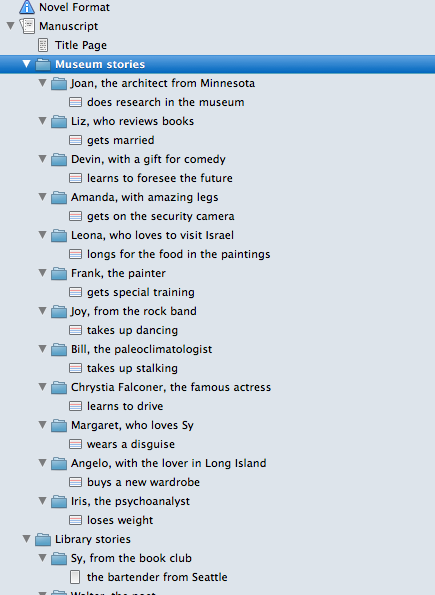 After I spun the wheels and got my random combinations of Protagonist with either Obstacle or Action, I set up folders and notecards in Scrivener. This sidebar, then, effectively becomes my outline for the whole novel.

Though I am going for overlap here, I didn’t want to keep recycling the same twelve characters over and over, so after the first round, I changed names and identifiers for the protagonists. So the Museum’s “Joan, the architect from Minnesota” became the Library’s “Gina, the art historian from Indiana.” And so on. I don’t know if I’ll stick with this when actually drafting the book — it might actually be easier to return to the same twelve characters in these four environments — but we’ll see what happens.

Still, I do want some overlap, so to reinforce  the connections between characters, stories, and locations, I intentionally used names from previous Protagonists in the Actions or Obstacles for later sections, and vice versa.

For example, in the Library section, the first Protagonist that spun up was “Joy, from the rock band.” But I changed that character, so as not to repeat myself. Instead of “rock band,” I used “book club.” But when I changed the name “Joy,” I borrowed “Sy,” who — we know from the Museum section — is the love interest for Margaret.

Also, when I changed the Musuem’s “Angelo, with the lover in Long Island” to the Library’s “Helen, with the sister in Minnesota,” I chose Minnesota in order to refer to the Museum’s “Joan, the architect from Minnesota”: Joan, then, becomes Helen’s sister.

After I got all four sections of twelve stories each sorted out, I started plugging in some rough ideas for how I might interpret the storylines. So, for example, the wheels tell me that “Liz, who reviews books” “gets married,” but they don’t tell me how or why or to whom. I decided to add the detail that her wedding will be “a special ceremony in the museum,” though I still don’t know how that will play out or what the conflict will be. Maybe it’ll be a guerilla ceremony and she’ll get kicked out? I don’t know yet. That’s what November’s writing frenzy will help me uncover.

As in years past, you can keep tabs on my progress on my NaNoWriMo page, where I’ll also be posting links to other people’s work and advice, articles about NaNoWriMo, and notes about my own project.

Otherwise, see you all back here next Friday with the first NaNoWriMo 2012 Writer’s Notebook post!

4 thoughts on “A Writer’s Notebook: NaNoWriMo prep and notecards”