I’ve been looking over 2013 and thinking about my writing work, and folks, this has been one hell of a year. 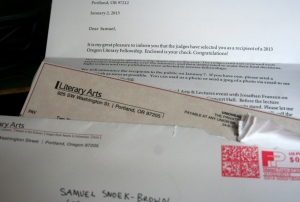 It started in the very first weeks of January, when I received — almost back-to-back — an offer from sunnyoutside press to publish my first book, Box Cutters, and an Oregon Literary Fellowship.

Both those events were huge. They were life-changing, in fact, but I’ll get there in a minute.

March was also an interesting month because I used my Fellowship money to take a research trip to Louisiana, where I finished the last work needed on Hagridden. I felt like things were moving for me, the literary stars aligning in my favor, and I didn’t even know what was yet to come.

A few more stories spread from April through October brought my total publications for the year to eleven. I also gave a summer reading with Unshod Quills and my friends Dena Rash Guzman, Justin Lawrence Daugherty, Ryan Werner, Mark Russell, and a whole lot of other awesome writers. And in August, I went on a writing retreat to work on a story cycle I started a couple of years ago.

Also in August, I found out my short story “Lightning My Pilot” had been nominated for the storySouth Million Writers Award, which was a huge deal. And then in September I discovered I’d been shortlisted to the Notable Stories list for that award, and in November, I found out I’m a finalist! (By the way, there’s still time to vote for my story before the end of the year, if you’d like to see “Lightning My Pilot” win that award.)

Also in November, on the same day I was giving a reading at my community college, sunnyoutside press released Box Cutters. My first book. I cannot express how important this has been to me. I’ve been reeling from the attention it’s gotten, with some kind reviews and photos from readers and an interview on the radio . . . .

But the year wasn’t done with me yet: just a few weeks later, in first week of December, I signed a contract with Columbus Press to publish Hagridden.

I couldn’t have hoped for a better year — the things that have happened so far have been more than I could have wished for in a single twelve-month stretch.

And next year is already set up to be pretty great, as I set up readings in support of Box Cutters and work through final edits with my publisher and prepare for a Fall release of Hagridden.